The 2001SRN siren began production in 1988, replacing the Thunderbolt with a much less complex, and thus more reliable, design. It also introduced battery backup. This model is identifiable from its successors by the large, rectangular rotator box design borrowed from the Thunderbolt Series as well as the "2001DC" label on the rotator. This series came in two forms, the early "Roundback" and the later "Squareback", referring to the shape of the rear housing, introduced in 1990. Roundback models were only produced for a short time and much less common than the Squareback variant. Aside from the rear housing, the two variations are identical. The original 2001-SRNs made from 1988-1998 had small motor covers and a simple stator design, however in 1998 a newer 2001-SRN model with a larger motor cover, improved stator design and small Federal Signal logo fixed to the motor cover was introduced. There was a refined version of this that was introduced not long after, however the dates of this change is unknown at the moment. This refined version debuted in roughly the year 2000 or 2001 and featured a new chopper motor and stator design that increased the sound output from 126 dB at 100 feet to 128 dB at 100 ft. Previously, this was thought to have been done with the introduction of the 2001SRNB, however this change was actually made in the later newer model of the SRN in the final years of production. This newer model was produced from then on until January 2003.

The 2001SRNB was the second generation of Federal Signal's 2001 series. The design is similar to its predecessor, the 2001SRN, with the most notable change being, a cube shaped rotator that was direct-drive. This model had no pulleys or belts making it much more maintenance free. It used the refined stator design from the latest model 2001-SRN that produced a sound output of 128 dB. The earlier models made from 2003-2004 had the small Federal Signal logo the SRN had, however in 2004 the FS logo was enlarged. The 2001SRNB was produced from January 2003 until January 2007, when the 2001-130 replaced it. 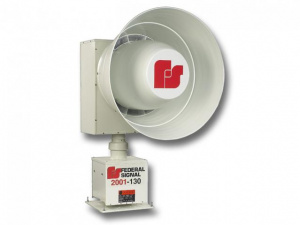 The 2001-130 is the current version of Federal Signal's 2001 Series, with production starting in 2007. The rear housing was also made taller, raising the chopper above the collector ring assembly and a support beam, which previously ran across the chopper. This change increased airflow through the chopper and increased it's output, bumping it up to 130dBc @ 100'. This model can be identified by the 2001-130 label on the rotator housing as well as the increased rear housing height. Throughout Indiana and Michigan, several 2001-130 style heads can be found bearing a 2001-SRNB sticker, it is speculated that these are early 2001-130s that Federal Signal placed SRNB stickers on, due to not having 130 stickers ready.

The 2001 Equinox is the latest version of Federal Signal's 2001 Series, with production beginning in 2010. It was originally made as a prototype for the 508 siren. However it was later adopted as a standard model of the 2001. The equinox is an 8 port "low frequency" model of the 2001, but due to the chopper design extending into the back housing, it introduced an air flow bottleneck, causing the Equinox to perform flat compared to the standard 130. See Federal Signal Equinox for more details.

The current controllers that Federal Signal sells to operate the siren are the DCFCB and 2001-AC which are used for 120VAC power and 208 or 220/240VAC respectively. Both controllers have NEMA 4X aluminum cabinets with 2 48VDC chargers.[1] 2001DC used to be the name used for the DC controller sold for the siren and is where the nickname for the 2nd gen -SRNs (the ones with the 2001-DC sticker) came from.[2]