The HPSS32 (for High Power Speaker Station 3200W, formerly called "Soundblaster") is an electronic siren produced by Acoustic Technology, Incorporated. It consists of four arrays with two speakers per array, each facing 90º away from each other. The speakers consist of four (4) 100W compression drivers per speaker, totaling to a total of 400W per speaker, and 800W per array, with a total combined wattage of 3200W combined. The HPSS-32 utilizes type TH300 speaker arrays manufactured by Kingstar, Inc., a China-based speaker manufacturer. 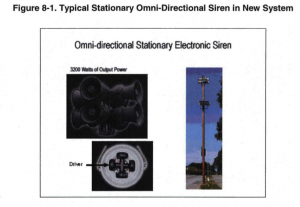 Diagram showing the 4 100W drivers per speaker on the HPSS-32.

Notable users of the HPSS-32 include Entergy's Indian Point Energy Center (IPEC), which has a system of approximately 167 ATI's.

The types of tones currently offered on the HPSS series sirens depends on the signals used. Currently, known tones that come default with the siren are the "Alert" steady tone, which peaks at 576hz (as opposed to the 1000hz high-pitched tone used on the older models from 2003 and 2004), the "Wail" tone, which sounds like a Modulator in pitch and frequency yet has noticeable "warbles" during the tone which is supposed to make it more distinctive and attention grabbing, and the "Yeow/Reverse-Whoop" tone, which is identical in pitch to the aforementioned "Wail" and also carries the distinct warbling undertone but sounds more like a continuous whoop in reverse, with the siren winding down during each whoop as opposed to it winding up. A regular "Whoop" tone is also offered on the HPSS series. Another default tone is the "Westminster Chime" tone, which is a 16-note, single toned Westminster Chime that sounds similar to the Westminster Chime tone used on Federal Signal's electronic sirens, albeit with some slight differences in pitch. Custom tones are also programmable through ATI's computer software, as are pre-recorded voice messaging. Live voice messaging may also be an option for the sirens but must be available through the activation console and not the siren controls itself. Over the years, ATI has been praised for the extremely good voice intelligibility that their sirens have; this is a result of the design the HPSS series utilizes.

Alongside the HPSS32, there was a rotating version, called the HPSS32R. The only known HPSS32Rs are in Menominee, MI, which use ATI's streamlined controller more commonly found on the HPSS-16 series (and was subsequently introduced for the entire HPSS series around 2005), most likely meaning that each speaker is 400 watts. There are 3 HPSS32Rs in Menominee next to inactive, early model, ACA Alertronics. There were also HPSS32R's installed at Susquehanna Steam Electric Station to replace their old Federal Signal system, however the sirens were removed after the plant's former operator, Pennsylvania Power and Light, sued ATI in 2008 for faults in design, and the sirens were removed and replaced by a system of American Signal mechanical sirens soon afterward. The HPSS32R, along with its 1600-watt companion, the HPSS16-R was quietly discontinued by ATI in 2018 due to a lack of sales and demand for the rotating versions of the HPSS series.