The Mobil Directo was a siren produced by the Biersach and Niedermeyer Company from 1942 to 1967. The siren would be offered in two variants, the gasoline-engine driven BN44 and the electric-motor driven BN44E.

After the Pearl Harbor attack in 1942, the United States Department of the Army volunteered the Biersach and Niedermeyer Company of Milwaukee, WI to begin production of warning sirens and siren controls. The result of this was the BN44G, coming out in 1944. Commonly known as the Mobil Directo, the BN44G used a 25 horsepower, VF4 Wisconsin air-cooled, gasoline engine to drive the rotor/stator assembly while also rotating the entire assembly. The projector design was unique, as air would be drawn in to the front of the siren through a "bowl" shaped protrusion, and the resulting sound would be forced from the top of the chopper up through a triangular, horn-like projector. Using this method, the siren boasted a 125 decibel rating at 100 feet. The gasoline-driven nature of the siren allowed it to be deployed in otherwise inefficient circumstances. For this reason, the BN44G saw widespread use throughout the Pacific Theater on remote island air bases. Additionally, the siren would be installed in several locations throughout the United States. In all, more than 2000 units would be sold, with the gasoline powered variant being discontinued sometime around 1953 or 1954. Of the gasoline powered variants, only five are known to still exist.

As time went on, it became evident that a gasoline driven siren was not efficient as a permanent installation, and in 1948 Biersach and Niedermeyer Company introduced the BN44E. The BN44E retained the same sound producing components of the BN44 while replacing the gasoline engine with a 10 horsepower Louis Allis electric motor. The BN44 and BN44E would be offered alongside each other until 1953, when the BN44 was discontinued. A three-signal model of the BN44E, the BN44E-MS-3, would also be offered. Additionally, many original BN44 sirens would undergo a coversion from gasoline to electric. The BN44E was offered up until 1967, when it was discontinued in favor of the Alerting Communicators of America Allertor. 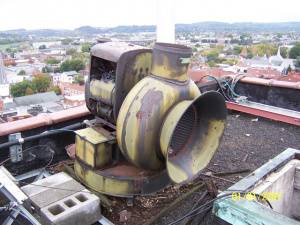 a Mobil-Directo that still retains its original gasoline engine. The engine is an air cooled Wisconsin 25HP VF4 engine.
Retrieved from "https://wiki.airraidsirens.net/index.php?title=Mobil_Directo&oldid=10294"
Categories: