From airraidsirens.net, the Internet's premiere site for siren information and discussion
Revision as of 22:32, 13 December 2019 by BrendanW21499 (talk | contribs) (Changed some relevant information pertaining to the production timeline of the Model 2. A 1911 dated 2 is in private possession, hence rendering the 1917 beginning of production date moot.)
(diff) ← Older revision | Latest revision (diff) | Newer revision → (diff)
Jump to: navigation, search

The Model 2 is an omnidirectional siren produced by Federal Signal Corporation. It holds the record for the longest production run of any siren. This siren has a rating of 102 decibels at 100 feet. There was also a coded version produced in limited quantities. Although the Fedelcode name was used on many examples, most did not actually contain a coding mechanism.

There were different variations of housings and other differences as 2 production carried on. In regards to housings, the first Model 2s had two louvers on top, and one on the bottom. This was common practice until the 1950s, when a new housing design, the more notable one louver on top and two on the bottom (as seen on the right) was introduced. There are versions with evenly spaced louvers. These housings belong to the Fedelcode versions of the 2. The first 2s were referred to as the "Long Legs". They were called this because the mounting legs that bolted to the motor were rather tall, at roughly 9 or 10 inches tall. It is also worth noting the Long Legs lacked the intake cone and stator ring for stabilizing the housing that newer sirens feature. The long leg sirens were predominately single tone, yet some dual tones have shown up, such as the example in New Orleans, LA that is pictured. The long leg sirens also used 4 brushes as opposed to 2. The 4 brush setup and long legs were replaced with a short leg, two brush setup around 1953, with the version still currently produced today. Although these differences are quite noticeable, the basic formula for the Model 2 has remained constant since the first ones were built around 1907. Federal had also made a coded version of the Model 2. A small motor located at the base of the siren would oscillate a gear which would move a metal shaft leading to the stator. Located at the top of the shaft was a small gear and a strip of gear teeth connected to the stator. When ever the bottom gear oscillates back and forth, the shaft would rotate and cause the stator to open and close making a "coded" signal. It is unknown how long the coded Model 2 was produced for.

During the Cold War Era, Federal Signal Corporation released a version of the Model 2 that was dual tone. The 2T had a rating of 100 decibels at 100 feet. The 2T started production in the mid 1950s. It is unknown when 2T production ceased, however, the 2T was an order option as late as the early 1980s, so it is wise to assume production probably ended around then. It is worth noting too that the newest known 2T is from 1981 and that said siren is in private possession. A vast majority of the 2Ts in private possession are from the 1970s. A production oddity is the long leg 2T. It is unknown if they were factory built units or ones in which the chopper and stator were swapped out. They may have existed in some quantity, as one long leg 2T is in private possession (It is also noteworthy that the privately owned is Darley branded), and one has been found in New Orleans, Louisiana, as pictured. 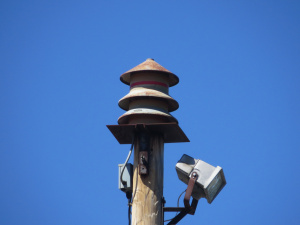 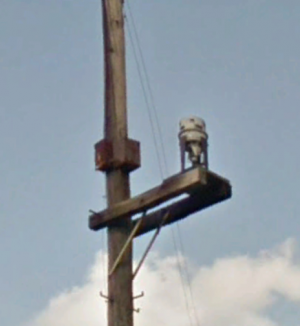 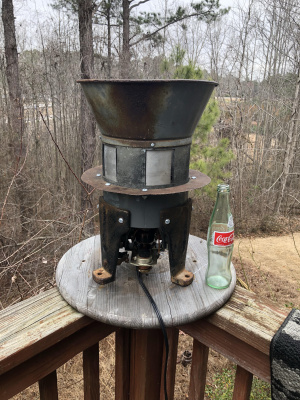 A Model 2 siren without the shroud. The Coke bottle is for a size comparison 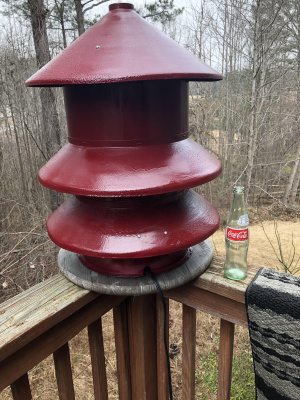 A housing for a Model 2. Coke bottle again for a size comparison.
Retrieved from "https://wiki.airraidsirens.net/index.php?title=Model_2&oldid=9868"
Categories: