The San Onofre Nuclear Generating Station (SONGS) Community Alert Siren System was a network of 50 sirens located within a 10-mile radius of the now shut down San Onofre Nuclear Generating Station located just past San Clemente, California. There were 24 WPS-2810 , and 26 WPS-2806, sirens. These sirens were activated by the four Jurisdictions the sirens are placed in, which is San Juan Capistrano, Dana Point, San Clemente, and MCAS Camp Pendleton which are all located in South Orange County.

The system was lasted tested fully on October 15th, 2014 due to SONGS being decommissioned (which was announced in June 2013), and the NRC not requiring full tests anymore. So after that, the system has only been booped/growl tested in each jurisdiction one by one every June from June 2015 to June 2018 since the plant was still in charge of them, and had to make sure they were still working in case the cities needed to use them for other emergencies. But in late 2018, it was announced that SONGS will no longer be in charge of the system after June 30th, 2019.

The cities were given the option to keep them and maintain and test them for themselves shortly after the plant announced their plan with the sirens, but 2 out of the 4 decided to keep them which is the 10 on MCAS Camp Pendleton and the 8 in Dana Point, but opted to remove one location completely and replace the 2800s, but keeping the original poles, so because of this, the plant did not do boop tests for June 2019. On July 1st, 2019, all the sirens were deactivated, and a few months later in December 2019, they were gradually removed.

All 9 sirens located in San Juan Capistrano were completely removed and all 17 sirens in San Clemente were removed as well, but the poles that have street lights and high voltage power lines attached are the only poles that remain in those 2 cites. Dana Point kept 7 out of the 8 poles, but removed the 2800 heads and cabinets, with 1 being removed completely along with its pole.

As of February 2020, the poles in Dana Point remain empty with no siren or equipment mounted on them, but new sirens will be up on the poles eventually, and they will be used for emergencies such as tsunamis. San Clemente is doing the same thing as San Juan Capistrano, except San Clemente has 19 sirens, (The most sirens out of any other city in the 10-mile radius of SONGS.) They will only be keeping poles that have street lights on them, and poles that support electrical lines. MCAS Camp Pendleton kept their 10 existing 2800s, and is now tied in with their system of Cooper WAVES sirens.

Unlike most run of the mill Whelen systems that are mostly always activated by via radio, San Onofre's system was hardwired, and activated by via landline DTMF. This applied to both the legacy and latest systems. It is unknown why the system even from the start was not just radio activated, but it could be because either for security reasons, or the lack of repeater towers nearby or close to the area all the sirens are in, and there was already landline infrastructure in place before the original system was even installed. 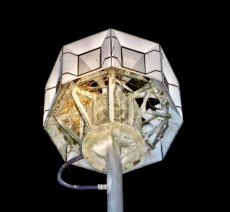 A Model 120 that was once apart of the system in 2003 illuminated by a spot light in the night sky. 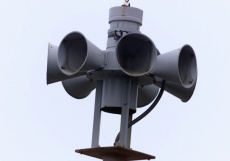 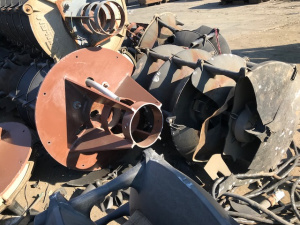 Last ever picture of a handful of Whelens from the last iteration of the system after arriving at a Edison contracted scrap yard in Long Beach, California in late February 2020.