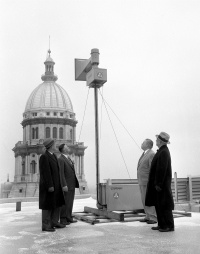 In late 1956, the City of Springfield purchased and installed 4 Thunderbolt 1000s throughout Springfield. The four locations included the Allis-Chalmers plant, DuBois Elementary School, the Pillsbury Plant and the Stratton Building. When tested on January 26, 1957, the sirens were barely audible in some parts of the city but it had the right effect.[1]

As the city expanded, the need for sirens also grew. The system was mainly comprised of SD-10s supplemented with Thunderbolts. The system also had a Model 2T, several Model 3s, a Model 7 as well as several Darley models of the previously mentioned sirens. In later years, the system was expanded with several EOWS-612s, 7 2001-SRNs and older sirens purchased from auctions. Matthew Stanley from The Siren Archive has photos of a few of the sirens through out Springfield. These can be viewed on The Siren Archive under the Sangamon County category.

Downfall of the System

Over the years, the city never bothered to implement maintenance plans. The effects of this poor planning was brought to life in 1989 when the city confessed that a Thunderbolt on Stevenson Drive was dead for over 3 years and that they had a replacement for 2.5 years but didn't have the funds to install it.[2] During the March 1st, 2005 siren test, the city stationed persons at each of the sirens only to find out that 30 of the 54 sirens did not activate.[3] Within a month, the city was able to get all but 2 sirens functioning. Most of the failures were due to trees blocking the antennas on the sirens.

Besides the lack of regular maintenance, the system was also plagued with activation issues. The system was originally activated with phone lines but between 1994-1996, the system was converted to radio activation. This system had two faults. There were only two activation points and each point had two different encoders. One encoder activated 10 sirens and a second activated the other 44. Besides having the screwy activation sequence, the system operated on the same frequency as the county dispatch. When activating or deactivating the system, the tones would prevent the channel from being used for dispatch purposes.

On March 12, 2006, a pair of twin F2 tornadoes struck the city. The sirens worked fine for the first storm but it knocked out power to roughly 90% of the city. When a second storm hit later that night, only a handful of the newer sirens with battery backup or undamaged sirens that still had power sounded.[4]

After the tornadoes silenced the sirens, the city began planning to replace the sirens.

Originally, the city went to Federal Signal for offers on a new siren system. In the end, the city signed a $983,000 contract with Wireless USA for a new system of 57 ASC T-128s with battery back up and computer control to be installed. By the end of November, the new siren system was installed and tested with the old system dismantled.[5]

The story of the old siren system doesn't end at them getting removed. On March 12, 2007, then Mayor Davlin donated the usable SD-10s to surrounding communities. The communities that received the sirens included Chatham, Curran, Riverton, Spaulding and Virden. [6][7] The only known SD-10 in Chatham was replaced in 2011 and the plans to install the siren in Curran died due to costs and no tornado safe area for the residents. Both Riverton and Virden received and installed a total of 3 SD-10 each. Riverton managed to procure the siren meant for Curran after they did nothing with it along with Spaulding's SD-10s which they also chose not to install. In 2015, Riverton disposed of all the SD-10s with Dawson acquiring one and installing it on the east end of town. According to meeting minutes for Spaulding around this time, Arenzville supposedly received 2 SD-10s but that has not been confirmed.

The 2001-SRNs were sold back to Wireless USA in exchange for a $1,000 discount on each new siren.

Over the years, posts on the forum have popped up about the old sirens and can be see on the Poorly Maintained Sirens thread or this post.

Some odds and ends that don't fit anywhere above.