Not much is known about sirens prior to the 2001s installation. However, a photo on Illinois Fire Trucks shows a Sterling behind the fire station and a Darley Model 3 installed on the water tower. The water tower was demolished prior to 1983 and the fate of the Darley is unknown. When the Sterling was removed is also unknown athough it is assumed after either the fire station became the police station or when the 2001s were installed in the early 1990s.

In 1992, the village installed 3 2001-SRNs. The locations included the park, behind Smiths Hardwood and in the Knollwood subdivision slightly north of Sherman. The sirens were equipped with battery backup and radio activation. Please note that exact install year is unknown. 1992 was mentioned at a board meeting when a complaint was brought up about a siren by a property owner. More on this below 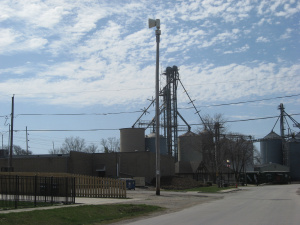 In late 2016, the siren behind Smiths Hardwood was moved to just south of Loves Truck stop on the west side of I-55 to provide coverage out there. A new 2001-130 with battery backup was installed between the school and new fire station due east roughly half a mile of the former Smith Hardwood location. This unit has also developed a nasty lean even though it was just installed.

The 2001-SRN in the Knollwood subdivision has the same yagi antenna as the one by Loves Truck Stop. The 2001-SRN at the park still has the original control box antenna, just moved to the side of the pole with an extension wire.

At the April 8, 2019 council meeting, it was announced that maintenance of the system is now handled by Braniff Communications. Griffin Tower Connection is no longer doing maintenance on the system. Hopefully there will be more news on this in the future.

The system sounds for 3 minutes of alert each test day. It is assumed the system is set off by the fire department but this needs verification.