H.O.R (Commonly misconcepted as Hear Our Roar. It actually stands for Harry O. Ricci, the name of the founder of the company) was a siren company based in Staten Island, New York, that built the Super Sirex and Siro-drone sirens. There are very few active units in the United States. The Super Sirex came in either 15, 40, or 50 horsepower. They either had port ratios of 9/9, 10/10, and 7/10. They were available in both dual and single head models, with or without a rotator. The Siro-Drone came in 1/8, 2, 3, 5, and 7 1/2 horsepower and were smaller vertical sirens similar to a Fedelcode/Federal siren. Its port ratios were 9,10, and 12 port. Over 700 HOR Siro-Drones and 34 Super Sirexes were installed in New York City, as part of the city's civil defense program. HOR also had another vertical siren, similar to the Super Sirex, called the Sirex, of which there are three known to be active in Massapequa, New York.

In the mid 60s, HOR moved their headquarters to Phoenix, Arizona, where they installed a large amount of Super Sirexes, to aid the existing system of Federal Signal Thunderbolt 2000 sirens. At least three of these Super Sirexes still exist to this day, two in private possession, and one reinstalled in Adrian, Missouri. Phoenix also had at least one dual tone HOR Sirex, which is currently in private possession. 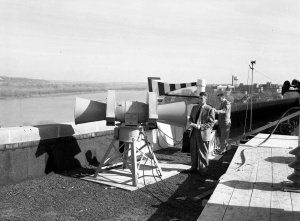